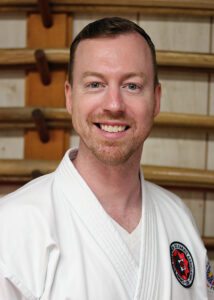 Sensei MacConkey has over 25 years experience in the martial arts. He began his martial arts training at the age of 10 in Chattanooga, TN under Grandmaster Won Gi Chu at Chu’s Taekwondo and Judo School.  After 2 1/2 years of training and receiving his 2nd Gup, Brown Belt, he moved to Alabama where he continued his training at Chung’s Taekwondo Academy in Pelham. Studying under Master Byung Chul Chung, he earned his 1st Degree Black Belt from the World Taekwondo Federation Headquarters in Seoul, South Korea in 2003.

In 2004 he began his Aikido and Japanese Karate training under Shihan Van Bushnell at USA Martial Arts. He became an uchideshi (live-in student) at the school where he underwent intensive daily training in all aspects of the martial arts including the development of instructor skills and expanding his studies of the martial arts to also include Judo, Iaido and Kobudo.  After 8 years of training, teaching and personal development, Shihan Van Bushnell appointed him to the position of Head Instructor at USA Martial Arts in Bluff Park.